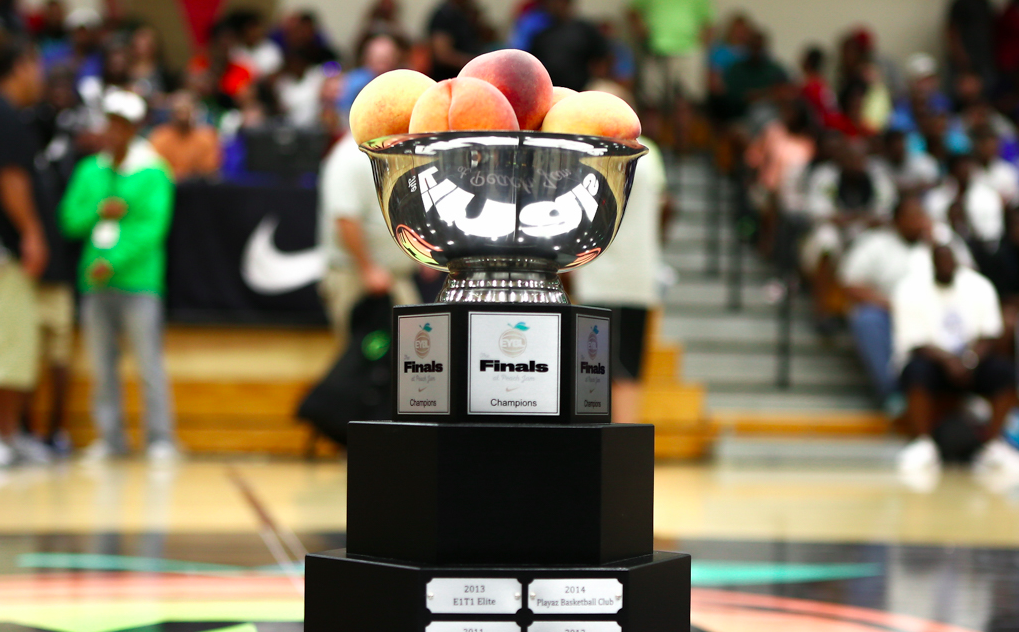 TIME: 8:30 PM EST
The Oakland Soldiers & Team WhyNot are set to play in tonight's semifinals, and while they both hail from California, that's about all they share in common.

The Defending Champion Soldiers return to the Final Four after taking the title a year ago, and they have just as much talent as last year's squad. The Soldiers are 15-7 on the season and 5-1 at Peach Jam, riding the red-hot play of guard Boogie Ellis - the second consecutive year the Soldiers have had a guard break out at Peach Jam, last year being James Akinjo.

The 6-foot-2 guard averaged 22.6 points, 4.2 rebounds, 2.2 assists and 1.4 steals in five pool play games. He hit 17 triples, so i is imperative that WhyNot defenders get a hand up. The rest of the rotation is well-balanced, with the frontcourt led by KJ Martin and Christian Koloko. The Soldiers play terrific team-ball under head coach Marshall Collins, and they can beat you at any pace you want to play.

The Soldiers are coming off win over No. 3 CP3, while WhyNot took out upstart Team United.

Team WhyNot is in the midst of the most successful inaugural EYBL season of all time, as no debuting program has ever advanced to the Final Four. Cassius Stanley has been terrific for WhyNot, averaging 18.4 points on 54.3% shooting in five pool play games. Iverson Molinar, Nimari Burnett and Jovan Blacksher Jr form an excellent backcourt that shoots well from the floor and limits their mistakes.

The emergence of 6-foot-9 junior Jalen Graham has been vital for WhyNot, as they were operating most of the season without a true big man. Graham averaged 8.4 points, 5.2 rebounds, 4.0 blocks and 3.4 assist per game, providing WhyNot with versatility and productivity on both ends of the floor.

Both of these squads have a lot of talent, and both of them play as a team. Defensively, WhyNot has looked better and better with each game. They will have a tall task ahead of them slowing down the Soldiers' backcourt, but there is a lot of familiarity there.

The Soldiers' Martin & Scotty Pippen Jr go to high school at Sierra Canyon with WhyNot's Stanley. Along with a trip to the Peach Jam finals, bragging rights will also be on the line.

Team Takeover returns to the semifinals after advancing to the championship game a year ago, and they have some unfinished business after dropping the title to the Soldieres. Despite dropping their first game of the season in pool play, the Keith Stevens-led bunch maintained their dominance for the rest of their pool matchups, including an impressive come-from-behind 65-57 showing in the quarterfinals against the City Rocks.

MOKAN returns to the semifinals after winning the championship in 2016, and they've looked terrific in their past five outings after a Peach Jam-opening loss to fellow bracket play finisher Team United. MOKAN has a 17.4 average margin of victory in North Augusta, riding the play of stars Malik Hall and N'Faly Dante. The defensive-minded MOKAN takes pride in locking you up, but head coach Chris Neff's squad can play any way you'd like. They beat the Lightning at their pace-of-play, rattling off 89 points in their quarterfinal win.

Just like MOKAN, Takeover is super-balanced, and plays some of the best team-basketball you will find at the grassroots level. In pool play, eight players averaged between four and 11 points per game, led by junior Justin Moore (11.2 PPG). Armando Bacot (9.8 PPG, 12.8 RPG) has averaged a double-double through five games, joining Moore and Hunter Dickinson (10.6) as the third double-figure scorer in the rotation.

Bacot and Dickinson will have their hands full with MOKAN's star sophomore Dante, who averaged 17 points and 11 rebounds in pool play while shooting 70% from the floor. Dante is a physically-imposing presence down low, and will need to stay out of foul trouble against TTO's talented frontline.

The matchup between MOKAN and Takeover is a rematch of one of the best regular games of the season. In the session one game, MOKAN gave Takeover their closest call of the regular season, falling 75-73 in a two-overtime affair. Dante went for 27 points and 15 rebounds in that game, which came against  Bacot-less Takeover frontcourt.

Team Takeover vs. The City Rocks gives us an intriguing matchup between east coast foes. Team Takeover is the tournament favorite, and while they dropped their first game of the season in pool play, they are still the odds-on bet to win it all. Led by EYBL coach of the year Keith Stevens, Team Takeover plays host to arguably the most talent of any rotation at Peach Jam. This is evidenced by the fact that they have nine players averaging between 4 and 10 points per game. Junior Justin Moore, Casey Morsell, Anthony Harris and Jahmir Young team with sophomore Jeremy Roach to make a deadly backcourt Their inside duo of Armando Bacot Jr and Hunter Dickinson will have their hands full facing off against the City Rocks' Isaiah Stewart.

A 1st-Team All-EYBL regular season performer, Stewart has seen his domination continue into Peach Jam, averaging a double-double while helping guide the Rocks to four pool play wins. Stewart has been assisted by backcourt mates Joe Girard, Noah Hutchins, Symir Torrence and August Mahoney, and forward Gerald Drumgoole has stepped up big on the interior.

Team Takeover plays strong, non-stop defense, and the City Rocks will have to play 32 minutes of complete basketball overcome it. Takeover's relentless attack has led them to a 20-1 record heading into bracket play, including a 15-point season-opening win over the Rocks. A lot has happened since they met in the 2018 opener - a 63-48 win by Takeover - so don't assume it's going to play out the exact same way. Hutchins and Torrence have both emerged as impact players for the Rocks, and with a star like Stewart, it would be silly to count them out.

The New York Lightning qualified for Peach Jam bracket play for the first time in program history, successfully securing a 3-2 record in Pool B behind a tough and talented rotation. Guards Dashawn Davis, Posh Alexander, Jordan Dingle and Alejandro Vasquez have each had their individual moments of brilliance during the past three days, and they will be a handful for the defensive-minded MOKAN.

Led by head coach Chris Neff, MOKAN rattled off four straight pool play victories after a Peach Jam-opening loss, and they looked terrific during the process. Malik Hall has been his steady, consistent self. Junior point guard Dajuan Harris has dazzled on both ends of the floor, while N'Faly Dante has maintained his dominance on the interior.

MOKAN won their last four games by an average of 18.3 point. They've blitzed their opponents from the jump, meaning the Lightning will need to come out firing on all cylinders. The two programs met earlier this season in Indianapolis, and the Lightning hope the result is the same. In the session two matchup, the Lightning edged out MOKAN 78-75 behind a strong performance by Alexander. The x-factor in this matchup could be Lightning big man Fredelin De La Cruz. The 6-foot-7 big man is enjoying a terrific Peach Jam, and he'll go to war down low against Dante and MOKAN's gritty frontline.

The two biggest surprises of Peach Jam meet in the quarterfinals, and both have a legitimate chance of running the table after their showings in Pool Play. WhyNot looked terrific behind the play of Cassius Stanley, but he had some major help along the way. Jovan Blacksher took his game to another level in the back half of pool play, while guards Iverson Molinar and Nimari Burnett were remarkably consistent. The emergence of big man Jalen Graham has done wonders for WhyNot, as size and bulk was their only big red flag heading into Peach Jam.

Team United qualifies after turning in a 3-2 Pool Play record including wins over MOKAN, Houston Hoops and Seattle Rotary. Juwan Gary, a recent Alabama pledge, was simply sensational over the five pool play games, and he is going to a problem for the WhyNot defense. Patrick Williams, Cartier Jernigan and Jalen Barr each stepped up during pool play, and while they don't have ideal size on the inside, neither does WhyNot.

They two programs match up very well with one another, and the matchup between Stanley and Gary is super intriguing. Both players are on their way to All-Peach Jam honors, and a win will help secure that notion. These two squads didn't meet during the regular season and they operate on opposite coasts, so they likely have minimal knowledge about one another. The quick scouting report? If you're Team WhyNot, contain Gary and Williams. If you're Team United, stop Stanley.

CP3's leader is Wendell Moore, a First Team All-EYBL selection and a certified high-major program-changer. Moore is a swiss-army knife of sorts for CP3, and there isn;'t much on the floor that he can't do. Boogie Ellis, Scotty Pippen and Gianni Hunt will lead the Soldiers against CP3's backcourt of Keyshaun & Kobe Langley, Antavion Collum and Isaiah Wilkins. An undersized swingman at 6-foot-4, Wilkins operates as a perfect glue-guy for CP3, and his ability to rebound and run the floor as been huge. The 6-foot-8 Collum adds elite size and strength to the backcourt, while the Langley brothers consistent productivity.

KJ Martin and Christian Koloko are monsters for the Soldiers down low, and it will be on Moore, Wilkins and frontcourt teammates BJ Mack and Dericko Williams to slow them down. Mack is a versatile four-man, and his presence down low will be desperately needed.

Ultimately, we expect this to come down to the guards. Ellis has been cooking all Peach Jam, and Pippen is always a threat to score, so CP3's main job will be containing them. This matchup is too close to call, and will be a lot of fun to watch unfold.