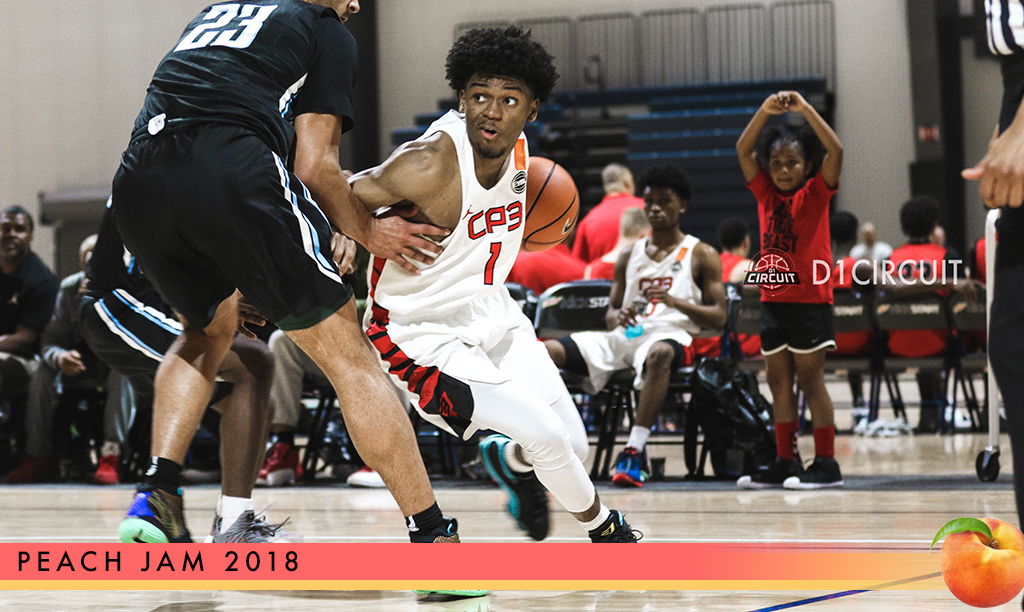 Team CP3 entered the 2018 NIKE EYBL as the defending E16 Peach Jam champions, carrying in the same roster to this year’s circuit. CP3 continued their impressive fun as a program, putting up a 13-3 record en route to a No. 2 ranking heading into Peach Jam. They hold nine wins over Peach Jam contenders, second most to Team Takeover (10). CP3 faltered in last season’s Peach Jam pool play round, making this season’s run even more important. Junior star Wendell Moore is their do-it-all floor leader, and as long as he is healthy and effective, CP3 should enter each game as a slight favorite. Top to bottom, this rotation is full of players that defend, hustle and play as a team. Head coach Jon Adams is one of the best in the business, and we have no reason to think they won’t be firing on all cylinders in July.

Moore is the star for CP3, and he had himself quite the spring, earning First Team All-EYBL honors behind 16-game averages of 17.7 points, 6.5 rebounds, 3.7 assists and 1.8 blocks. Moore scored in double-figures in all but one game, and his overall efficiency was off the charts; the 6-foot-5 swingman shot 53% from the floor and 85.3% from the stripe. Moore (247 No. 17) has the ball in his hands frequently, only turning the ball an average of over 2.2 times per contest. The Cox Mill (NC) product is currently running with Team USA U17 in Argentina for the FIBA World Cup, and while that is extremely valuable experience, the trip will leave Moore with only one day to rest for Peach Jam. Simply put, CP3’s star is an elite prospect in the 2020 class, and will be on full display for Adams and company in mid-July.

CP3’s backcourt is made up of four players who combine to average 31.6 points per contest. The brothers’ Langley - Keyshaun and Kobe - are the lead guards for CP3. Both are 3-star recruits and both are effective in their own right, with the former being the more aggressive offensively of the two. Keyshaun shot a team-high 90.2% from the free throw line en route to a 9.4 scoring average in 16 games. The two combine to average 7.1 assists & 3.3 steals per game, and their pesky defensive ability has proven effective all season long. 6-foot-8 combo guard Antavion Collum plays big minutes for CP3, and quite frankly, he’s much more talented than his averages indicate. In 16 games, Collum put up 7.1 points, 5.1 rebounds and 1.3 assists, operating in a role that doesn’t require his scoring ability. Collum has been able to show off other aspects of his game, and is a prime contender to break out in July. Junior Chaz Gwyn (8.5 PPG) rounds out the rotation, and he’s on the court for one reason: to get shots up. The 6-foot-1 guard hit a team-high 26 three-pointers in only 11 games, knocking them down at a 41% clip. If Gwyn catches fire in a game, CP3 holds to ability put you away early.

Moore probably won’t leave the court, which is good news for CP3 fans, but he’ll have the help of two double-figure scorers. Juniors BJ Mack (12.6 PPG, 6.2 RPG) and Isaiah Wilkins (11.7 PPG, 3.8 RPG) both enjoyed terrific spring campaigns while displaying their versatility. The two combined to hit 25 three-pointers at a 45% clip, while Mack (247 3-star) shot 57% from the floor and 77% from the line. Wilkins is undersized in the frontcourt, but the 6-foot-4 swingman makes up for it with his relentless motor and high basketball IQ. Neither Mack or Wilkins are mistake-prone, and both will play huge minutes. Big man Dericko Williams will be returning from a finger injury which limited him to nine regular season games, and the 6-foot-8 junior will be looking to improve on averages of 4.9 points and 4.6 rebounds per game. Collum will certainly see time in the frontcourt when CP3 goes small.

CP3 will implement a nine-man rotation at Peach Jam, and the only reasonable red flag is their lack of size on the interior. CP3 is in the bottom four in the league in rebounding, and they only have two players over 6-foot-8. Their lack of size hasn’t been an issue this season, and while we don’t expect problems moving forward, they’ll need to continue to do the little things to make up for their lack of bulk on the interior. CP3 recorded a 13-3 regular season record, holds signature wins over the likes of AOT, Drive Nation and the Oakland Soldiers, and they are super well-coached. It wouldn’t be wise to bet against this group, and as long as Moore stays healthy through World Cup action, they’ll enter Peach Jam as the favorite to take home Pool D.