McKinzie Calls it For Buffalo 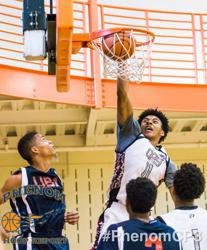 On Monday 6’7” Senior Quate McKinzie announced at his school that he would attend Buffalo University. McKinzie, who took the stand at Harrells Christian chose Buffalo over a final three that included Temple and UNC Wilmington.

McKinzie is a rim protecting Power Forward who should be able to contribute early. After his performance at our Phenom CP3 Live we wrote, “McKinzie has a 7’ wing span and a 35”+ vertical. He is a rim protector and rebounder at his floor. Yesterday, he made shots and set up team mates from the high post.”

McKinzie was not shy about stating Buffalo led for his services. In our interview with him three weeks ago, he took no time to state Buffalo was recruiting him the hardest. His official visit to the campus solidified everything for him, “It’s a real nice place. It is a big school with a lot of students. The players really connected with me. The thing that really got me was how much love the students show the players. It felt like home.”

McKinzie, who is rated as the #13 player in North Carolina’s 2016 class, is a two time alum of the prestigious North Carolina Top 80. After his performance in the 2015 event we wrote, “McKinzie carries a 7’ wing span, and a huge vertical leap. He carried several games this year where he finished with 10+ blocks and routinely grabbed 10+ boards. McKinzie is a name that people know, but still is a little under rated. Look for him to come out and create his own destiny here. A dogged defender, and a high motor leader.”

The system Buffalo runs and their plan for his skill was very attractive to McKinzie, “I will be playing the 3/4 with them. Their style of play is what I am looking forward to in college. They do a lot of screen and rolls, and making plays off the reads.”